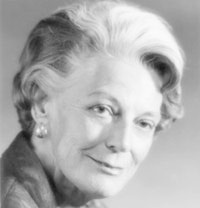 In 1981, Margaret Gruter founded the Gruter Institute as a forum for scholars and practitioners to explore scientific findings about the human mind and human nature and to consider how this information relates to a wide range of legal and social issues. Frustrated by the borders between academic disciplines, Dr. Gruter sought out intellectuals interested in investigating new ideas across disciplines. For over two decades, the Gruter Institute has been a catalyst in the bridging of the gap between law and the behavioral sciences.

A deep desire to understand the meaning of justice followed Margaret Gruter from the earliest years of her life to her death on August 2, 2003. A native of Germany , she was a liberal arts student steeped in the ethics and philosophies a classical education provided in the 1930s — when Hitler’s 12-year regime rose, grew, and destroyed lives. Those extremely difficult times, during which she was classified as “unreliable” and suffered persecution by the Nazis, challenged her to examine the philosophical concepts of fairness, justice and ethics. Shortly after the outbreak of World War II, she began law school at the University of Heidelberg, where she received her doctor of jurisprudence in 1944.

She immigrated to the United States of America in 1951 with her husband, who worked as a country doctor in rural Ohio. A series of personal experiences extended her search for explanations to the findings of ethology and neurosciences. She had assisted her husband with his medical practice for many years, when she became the administrator of a medical facility for 150 developmentally disabled patients. She witnessed firsthand that even though patients received nurturing care, their specific brain dysfunctions significantly limited their ability to learn new skills. She also got a close look at issues involving biological research through many discussions with her daughter, a physician who has been involved in medical research for 40 years. Through all this, it became increasingly clear to her that a scientific approach to human behavior is not possible without a basic understanding of evolutionary biology.

Her husband and she moved to California in 1969, and again she became a student of law, this time at Stanford University Law School . Her interest in ethology led to contacts in the Department of Psychiatry and Behavioral Sciences, where she met Dr. Jane Goodall, whose studies of chimpanzees became instrumental in her research. In 1972, she met Dr. Konrad Lorenz, the renowned ethologist and Nobel laureate, who encouraged her attempts to connect law and biology. The only way to build such a bridge is with a variety of tools, from ethology and the neurosciences to sociology, anthropology and economics.

Dr. Gruter was guided by the realization that the legal system can only be effective or meaningful if it accomplishes the desired changes in the behavior of the people it addresses. Therefore, understanding behavior that is affected by law – legal behavior – is the first task of the legal profession. A woman of exceptional drive, supreme intellect and accomplished business acumen, she was uniquely able to pioneer the bridging of the gap between law and the behavioral sciences.

It takes interdisciplinary teamwork to understand legal behavior and to find ways to address today’s problems. Over the years, the Gruter Institute has attracted the cooperation of leading scientists and scholars from many disciplines and countries to a series of interdisciplinary conferences. It has supported a wide range of research activities and have conducted teaching seminars for law professors, students and federal judges.

With the help of countless scientists and scholars, the Gruter Institute serves to bring a new understanding to our urgent problems, helping us to improve our common destiny. As Dr. Gruter said on many occasions, so much of this endeavor remains to be explored and brought to light.